It is something we’ve all seen done, or done ourselves, and it seems innocent and safe enough.  The kids think it is great fun but is swinging children by their hands OK to do?

As a Registered Osteopath  the issues I see are that in children their joints aren’t fully developed, and within the bones there are bits of cartilage (the growth plates) that are susceptable to strain. Part of the elbow joint is called the (proximal) radioulna joint and the diagram below shows it.  There is a ligament that wraps around the head of the Radius and when you swing children by their hands you can traction this joint to the point that the head of the Radius gets pulled through the ring of the ligament, dislocating the joint.  This can be because the ligament is a little “stretchy” or because the head of the radius isn’t yet fully formed into it proper bell shape (it can be more like a stright shaft, making it easier to pull the head through the ligamentous ring). Likewise, but less likely, the traction forces through the arm place a strain into the growth plates, potentially fracturing or deforming it (similar to a green stick fracture).  Treating a dislocated radio-ulna joint is a relative simple manual procedure that can be done by a doctor in A&E, but if you damge the growth plates that can be much more significant and difficult to deal with. 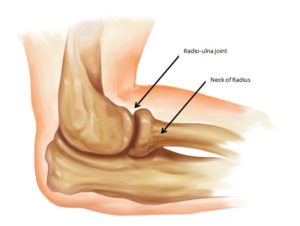 It might sound like a rare injury, and it is, but it does happen.  I know of at least five children who have sustained this injury.  And as I really don’t want to come across as a party-pooper spoilt-sport, I’d like to offer one small change, and that is to swing the children whilst holding them round their chests / under their arms.  That way you don;t traction their arms and thus prevent these injuries.

Philip Waldman D.O. FSCCO is a Registered Osteopath, Cranial Osteopath and a founder and Director of Chelsea Natural Health

This site uses Akismet to reduce spam. Learn how your comment data is processed.